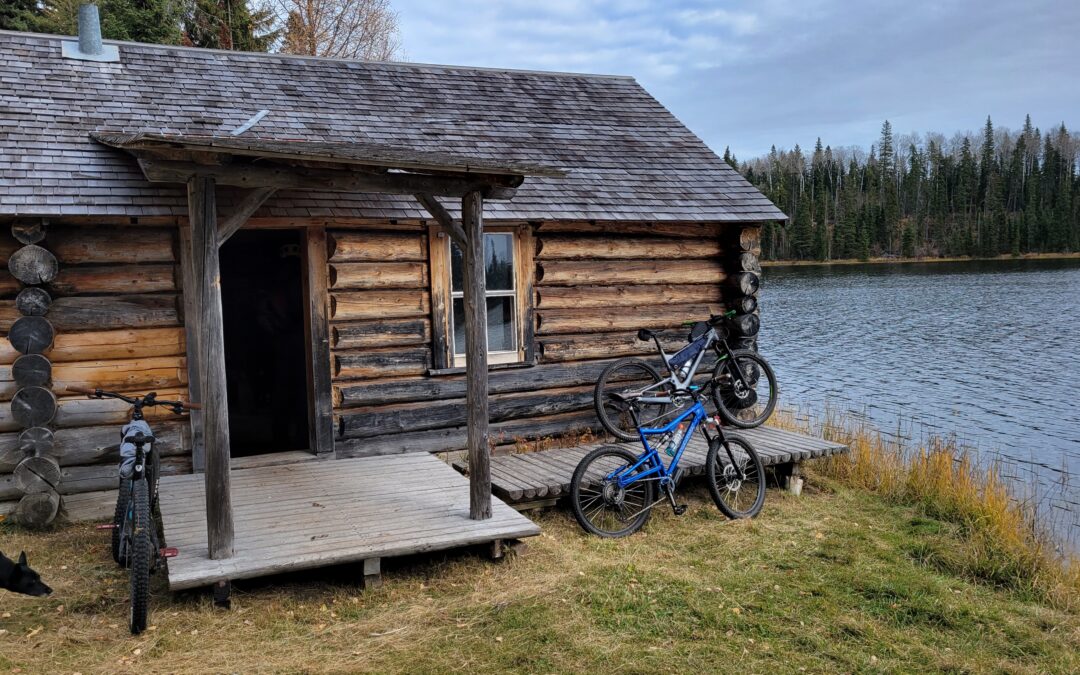 The first time I was invited to bike the Grey Owl’s trail I thought “It’s a hiking trail, how hard could that be?”

Biking this trail is hard to describe the difficulties. Yes, it’s a 40km bike ride. But people do that all the time. And, yes, it’s a hiking trail, so there’s not too much in the ways of technical features that you have to navigate. And the elevation really only changes about 50m over the course of the trail (although you ascend/descend between 400-500m total by the end). And it’s October, so generally the water crossings are easily passable and there are no bugs. So what’s the big deal?

Aside from the fact I’m not in shape, any 40km trail ride is a feat. But this Grey Owl’s trail is riddled with fallen trees and roots. So many roots. Which is primarily the biggest issue in rider fatigue. It’s hard to describe if you haven’t seen it, but the constant hammering of roots and rocks as you ride this trail is an unrelenting beating that eventually causes each rider to wonder what on earth possessed them to sign up for this. At around the 30th kilometer, some have visions of throwing their bike into the lake. Others hate that they’re on the trail at all. Many go digging in their bags for whatever sustenance their body is craving to help them get past their current wall of fatigue. But eventually everyone finishes the ride with a great sense of accomplishment. The joy of riding your bike, developing new and better skills as the trail continues to wind in front of you and the pride of knowing you were able to complete the ride, even when your mind and body desperately wanted to simply give up, is a reward that cannot be put into words. Sure, many don’t repeat this venture more than once. Some only twice. But it is a ride that everyone who enjoys such physical and mental demanding accomplishments should seek to achieve at least once!

As we approached Prince Albert, the weather turned from dreary, to rain and then to snow. A quick stop in Prince Albert to pick up a couple supplies and grab some coffee and we continued north into more and more snow. All of us wondering what we had gotten ourselves into, but no one wanting to say it out loud! However, we arrived at the trailhead and the snow had stopped and so we all grabbed our gear and started on the ride!

The start of the ride goes quick. Fresh legs, good spirits. The kilometers tick away consistently and without much issue. The roots and fallen leaves are a constant threat that requires focus and attention, but the winding trail, up and down, around and through, takes us through many different eco systems that constantly pull our attention away from the trail in front of us. Forests of evergreens, then forests of poplars. Marshy lowlands, rocky high grounds and sandy beaches. Within just 5 kilometers, the scenery around us has changed so many times it’s hard to keep track. The number of fallen trees, unfortunately, is the most I’ve seen in the last three years of doing this ride.

We stopped briefly at the 10km mark where the park has a couple of red Adirondack chairs placed on the side of the hill with an amazing view of Kingsmere lake. Continuing on, we took our first stop for some lunch at the Sandy Beach campground. Skinner the trail dog helped keep the squirrels at bay as we enjoyed our lunch of protein bars, peanuts and beef jerky. However, with the temperature hovering around 6 degrees Celsius, we started to pack up as soon as the chill began to set in and continued to Northend. This next stretch between Sandy Beach and Northend is a challenging section of rocks, roots, tight trails, marshy and boggy terrain and lots of boardwalks. This section slowed our pace as our legs began to fatigue and our focus becoming harder and harder to maintain.

After another stop at Northend, we continued along the beach and then across to Lake Ajawaan. These last 3 kilometers includes the longest climb, and some really fast and fun descents. It was at this point I was starting to wonder if I’d underestimated just how out of shape I was this year!

We soon made it to the cabin and enjoyed another break as we checked out Grey Owl’s cabin with the bed, desk, stove and beaver dam (his best friends were beavers) all well preserved and maintained. We also checked out the upper cabin, where his wife Anahareo and visitors would stay, as most didn’t relish the idea of sharing a cabin with beavers. Finally, we meandered over to the gravesite where Grey Owl, Anahareo and their daughter, Shirley Dawn, have all been buried. After enjoying this piece of history, we signed the book, and then began the journey back.

We reached Northend again and took a break to grab more snacks and fill our water from lake water filtered through our MSR gravity filtration kit. We had long since realized that our goal of being back at the car between 5 and 6pm was not going to happen, but thankfully we had strapped on lights when we started so we were prepared in the event that we couldn’t beat the sunset!

The ride back was mostly uneventful other than a stick that decided to jam itself in one of the derailleurs and cause some shifting issues and a few leg or neck cramps that threatened us from continuing. We all were starting to feel heavy fatigue, and starting back up after each break was getting tougher each time. Hills became a question of whether to ride them for faster time, or walk them to save our increasingly painful backsides. Lifting our bikes over fallen trees became an increasing feat of strength that I wasn’t sure I could muster.

It was here that we all began wondering why we were doing this and pondered how we might quit for the night! Of course, this was wishful thinking and we knew we would eventually make it back, even if we had to walk (or crawl!) at the end. I pulled out an orange from my pack, peeled it and savoured each bite. It was probably the best orange I’d ever tasted.

We timed our return ride perfectly to hit a small stretch of beach near the Westwind campground just as the sun was setting across Kingsmere lake. We stopped to take in the sunset and enjoy our last break before the final push back to the car. And to get our lights turned on!

The last stretch was one of quiet resolution. We each kept pedaling, some of us pushing through cramps, others through neck pain, and most that truly didn’t want to sit on a bike seat ever again. And slowly, and with growing hope, we watched the kilometres slowly tick away as the landmarks we had seen 7 plus hours earlier started coming into view. The trail lit ahead of us under our bouncing, weaving lights until we emerged from the forest and finally saw the car awaiting us! With some hollers and hurrahs, we dropped our bikes, grabbed some end of ride treats as we all tried to catch our breath and relish the fact that we had completed the ride even when our minds and bodies so desperately wanted to quit! We finished the day with a stop for some food in Prince Albert, which tasted so good! Until next year!